In the Company of Wolfie 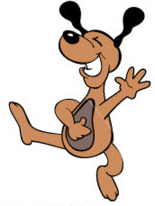 After my last blog post about losing Waldo, we received an amazing outpouring of gifts through the mail. Big fuzzy thanks to all of you who sent something from our wish list. Your kindness is wildly appreciated!

So while we were struggling (and continue to struggle) through the loss of Waldo, something else happened. A lot of something elses, really. In the weeks leading up to Waldo’s passing, we were working through Dalene’s recovery from a cerebellar stroke.   That’s a stroke that happens in the back of the brain and doesn’t present like other strokes. In fact, it’s pretty rare, and accounts for something like only 2% of all strokes. But that’s all Dalene. She always gets the weirdest of the weird. The stroke presented in a gradual procession of symptoms, beginning with drunken walking that progressively got worse, and then drunken speech. From the hospital, Dalene went to rehab at the nursing home a couple of miles up the road from us. It’s the same place where her dad stayed during the final year or so of his life. The six weeks Dalene spent there were a mash-up of anger, sadness, denial, and finally, very hard work. I would go up twice a day: in the morning while she had two hours of therapy, and again in the evening, around dinner time. In the evenings, I would take one of our dogs along, and whomever it was would visit with the residents who were up to it. So many of the residents expressed how much they missed their own dogs. We made some friends there.

One of our new friends is Anne. She is in her late seventies, and just the most adorable woman. I don’t know Anne’s whole story: what I do know is that she has no family locally, and before she went into a facility, she was living in her car with her dog, Wolfgang Amadeus Mozart. She was given a court-appointed guardian, and Wolfie was taken away from her and put into the care of an appointee. Anne loved it when I took our dogs up to visit, and she would dote on them and walk them around the halls of the facility. She told us about her Wolfie, and about how much she missed him. She said that the last time she had seen him was on her birthday two years ago. His caretaker lived all the way out in Painesville, and it was just too far to bring him for visits.

I’ve always believed that ideas are out there kind of flying around in the ether, and that any of us can reach out and grab onto one at any given time. I think it accounts for similar books being written around the same time, or crazily similar movies, and sometimes even similar inventions.

Wolfie is a thirteen-year-old Maltese. He reminds us a little bit of Lammy-Lamb.

Well, there was just such a moment of synchronicity last week. I was sitting in the nursing home thinking about Anne’s little Wolfie, and my friend, LeAnn, was writing a proposal for a class about helping the elderly who can no longer care for their pets. So I suggested to Dalene that we try to find out who was taking care of Wolfie, and see if we could foster him at our house so he could visit with Anne a couple of days a week on a regular basis. The next day, I read LeAnn’s report, and then, we knew we had to work to make it happen. 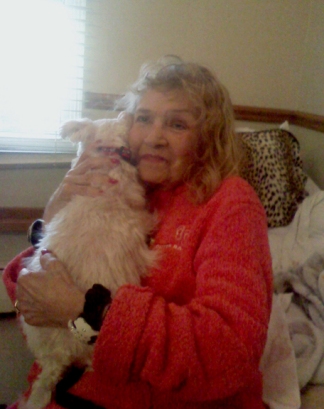 This morning, we met Anne’s guardian out in Willoughby, and he handed over Wolfie and all of the little guy’s earthly possessions. We drove straight to the nursing home to bring Anne and Wolfie together again. He spent the afternoon with her.

It was an awesome day.

“The wolves knew when it was time to stop looking for what they’d lost, to focus instead on what was yet to come.”
― Jodi Picoult, Lone Wolf

Would you like to offer us a helping hand here Up on the Woof? We have vet bills up the yin yang. We are always looking for coupons for certain items we purchase for our dogs on a regular basis. If you have Rachael Ray Nutrish coupons (we are still trusting Ainsworth foods),  Cesar coupons, Bil Jac Frozen coupons, or milkbone coupons that you will not be using, please save them for us. Contact me if you have some to send. Donations can also be sent via Paypal to yelodoggie@yahoo.com

C.A.Wulff is an author, artist and animal advocate. She has been involved in pet rescue for over twenty-five years. She has written two books about her true-life adventures living with an ever-changing house full of pets: Born Without a Tail, and Circling the Waggins, and a guide to animal advocacy using the Internet as a tool: How to Change the World in 30 Seconds". Wulff also wrote a pet column and book review column for the Examiner, and was a contributing editor for AnimalsVote.org. She attributes her love of animals to having been raised by Wulffs.
View all posts by yelodoggie →
This entry was posted in Animal Advocacy, Random Woofs and tagged animal advocacy, C.A. Wulff, dogs, foster dogs, homeless, nursing homes, pets, senior citizens, senior dogs, seniors, the elderly, Up On The Woof. Bookmark the permalink.

6 Responses to In the Company of Wolfie