Animal Advocacy: the End of Innocence

Last week, I saw a video on Facebook that a lot of people were outraged over — it was of a woman beating her dog with a frying pan — and I wasn’t horrified.

I watched the video three or four times, because there was an unevenness in the filming that made it appear like it was cut and looped. The first place my mind went as I watched was the weapon. I don’t think it’s all that unusual for a dog owner to smack a dog with a rolled up newspaper or perhaps a chewed up slipper. But what on earth made this woman grab a frying pan? I could only conclude that by grabbing something metal to hit the dog, clearly, she wanted to hurt the animal, not correct a bad behavior. 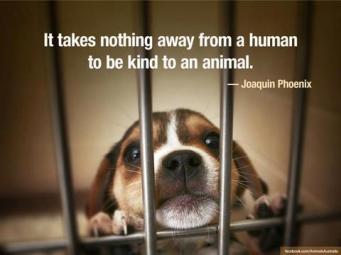 Let’s just get this out of the way: you shouldn’t hit your dog. Hitting a dog will not teach him the difference between right and wrong, (no matter what is used). What it will do is teach the dog to be afraid of you. And that leads to more, and different, bad behavior like biting, failed recall, house soiling, and aggression. The frying pan was doing just that: the dog in the video was terrified.

My subsequent thoughts were “what an asshole” and “I hope whomever filmed this took the dog away from her.” And finally, “why aren’t I angrier?”

Without a doubt, the dog in the video was being abused. But I realized that during the preceding two weeks, I had seen much worse. Truly horrific things. I had seen photos of dozens of dogs crammed into a single crate so tightly that surely they couldn’t breathe. I had seen a photo of a dog whose ears and nose had been cut off, and another whose four legs had been hacked off at the ankles. I had seen a photo of a dog that had been burned with acid. I had seen photos of half a dozen dogs starved until every bone was visible. And man, all of those things had so affected me that I wanted to stand on a hilltop and scream until I puked my heart and lungs up. By comparison, a dog being beaten with a frying pan seemed almost…tame.

What on earth has happened? Has the continuous stream of appalling cases of cruelty I’ve encountered in advocacy served to desensitize me to all but the most outrageous atrocities?

And…is that good or bad? Helpful or harmful?

I grew up believing that it’s better to feel too much than too little. So the thought of being able to watch that video with such odd detachment makes me a whole different kind of uncomfortable. 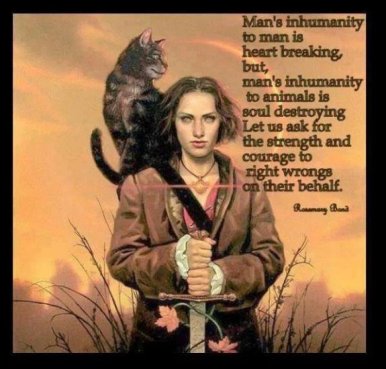 But on the other hand, I know it’s not enough when you are working in advocacy or rescue to be outraged or empathetic. Having those feelings doesn’t change anything unless they motivate you to act. And you’ll never get anything done if you are paralyzed by fear or disgust or anger. You have to push past it.   You have to take those emotions, set them aside and focus on what action needs to be taken.

How much of ourselves do those of us in advocacy and rescue lose in the process?

While I mulled these questions over for the past couple of days, my friend, Tami, published a blog post addressing the challenges that sensitive people face in rescue. (maybe she saw the same cases of cruelty that I did last week.) You can read that post here.

Want to give us a helping hand Up on the Woof? We are always looking for coupons for certain items we purchase for our dogs on a regular basis. If you have Rachael Ray Nutrish coupons

(we are still trusting Ainsworth foods),  Cesar coupons, or milkbone coupons that  you will not be using, please save them for us. Contact me if you have some to send.

And if you come across an errant box of Purina Busy HeartyHides for sale on amazon or ebay, for God’s sake, send them to us!

I also have a wishlist of items that we just can’t afford, but would make life a whole lot easier. It has recently been updated. Click the link below to view. Topping the list is a Thundershirt for Maria.

Ariel C. Wulff is an author, artist and animal advocate. They have been involved in pet rescue for over twenty-five years. They have written two books about their true-life adventures living with an ever-changing house full of pets: Born Without a Tail, and Circling the Waggins, and a guide to animal advocacy using the Internet as a tool: How to Change the World in 30 Seconds". Wulff also wrote a pet column and book review column for the Examiner, and was a contributing editor for AnimalsVote.org. They attribute their love of animals to having been raised by Wulffs.
View all posts by yelodoggie →
This entry was posted in Animal Advocacy and tagged animal abuse, animal advicacy, animal cruelty, C.A. Wulff, Compassion fatigue, dog rescue, dogs, empathy, ptsd, Up On The Woof. Bookmark the permalink.

1 Response to Animal Advocacy: the End of Innocence