Just What the Hell is a Puppy Mill, Anyway?

Everything you need to know about puppy mills is  offered in the standard English dictionary under “Mill”.

1.a factory for certain kinds of manufacture, as paper, steel, or textiles. OR PUPPIES

2.a machine or building for grinding, crushing, or pulverizing any solid substance: SUCH AS A DOG’S JOYFUL SPIRIT, OR A BREEDER DOG’S HEALTH AND BODY.

3. a business or institution that dispenses products or services in an impersonal or mechanical manner, as if produced in a factory:

17. through the mill, Informal. undergoing or having undergone severe difficulties, trials, etc., especially with an effect on one’s health,personality, or character: He’s really been through the mill since his wife’s death. 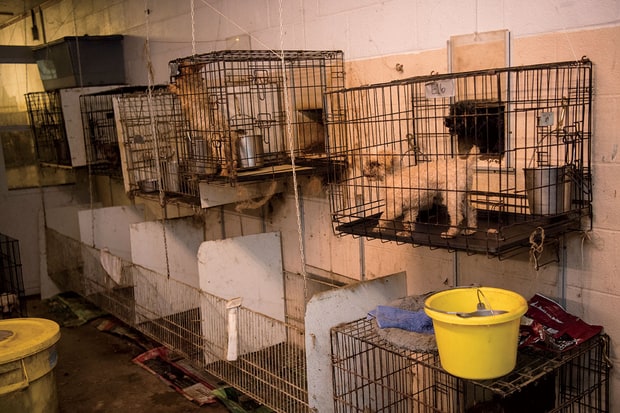 Part of the Yates Puppy Mill, recently busted by HSUS in N.C.

Rolling Stone just came out with an excellent article about an HSUS rescue of dogs at the Yates puppy mill in North Carolina.

“There are, by HSUS’s estimate, about 10,000 puppy mills in America, though the organization concedes that no one knows the real number: It’s an industry born and raised in shadows.” – Rolling Stone

Although there are many of us in advocacy who are fighting against pet stores who sell mill dogs, and who petition lawmakers to protect dogs from becoming victims of this industry, the Agricultural lobbyists make sure to block any bills that might effect their bottom line.
Advocates have been trying to create legislation whereby pet stores would only be able to sell dogs from rescues. But, just recently, the pro-puppy mill amendment, SB 331, was lobbied by Petland and signed into law by Ohio Governor John Kasich on Dec 19, 2016. The bill allows pet stores to obtain their puppies from breeders, eased restrictions on puppy mills, AND takes away cities’ rights to  ban puppy mills. There was a lot of other crap in that bill, and it was the other stuff (like blocking a raise of the minimum wage) that carried it into law according to Kasich.  As long as there continue to be no restriction on Christmas Tree bills, passing meaningful legislation will continue to be a difficult proposition.

The USDA only has one law to govern the care and housing of commercial dogs. The Animal Welfare Act (AWA), which was enacted in 1966, lays out the minimum standards for breeders. According to the AWA, dogs may be kept in tiny crates their entire lives. They can be denied social contact with other dogs, bred as many times as they enter heat, then killed when they are no longer able to breed. There are more than 2 million dogs put down every year in shelters, but there are  no limits on the number of dogs puppy millers can breed.

“There’s this gross disconnect between our feelings for dogs and the way we guard them from abuse,” says Wayne Pacelle, the president and CEO of HSUS. “The USDA has a total of 100 inspectors to inspect thousands of breeders in 50 states.” But they also have to inspect every zoo, circus and lab that uses animals for research testing. “We’ve been petitioning them for decades to improve the law – require bigger crates for breed dogs, give them access to outdoor dog runs and much prompter vet care when they’re sick – but they can’t even enforce the bad law on their books,” says Pacelle.

For now, our best defense against puppy mills is to not support them by buying the puppies they produce. It’s pretty hard to keep a business going if there is no demand.
Please adopt, don’t shop.
—————-

We are also always looking for coupons for certain items we purchase for our dogs on a regular basis. If you have Rachael Ray Nutrish coupons,  Cesar coupons, or milkbone coupons that  you will not be using, please save them for us. Contact me if you have some to send.

And if you come across an errant box of Purina Busy HeartyHides for sale on amazon or ebay, for God’s sake, send them to us!

I also have a wishlist of items that we just can’t afford, but would make life a whole lot easier. It has recently been updated. Click the link below to view.

C.A.Wulff is an author, artist and animal advocate. They have been involved in pet rescue for over twenty-five years. They have written two books about their true-life adventures living with an ever-changing house full of pets: Born Without a Tail, and Circling the Waggins, and a guide to animal advocacy using the Internet as a tool: How to Change the World in 30 Seconds". Wulff also wrote a pet column and book review column for the Examiner, and was a contributing editor for AnimalsVote.org. They attribute their love of animals to having been raised by Wulffs.
View all posts by yelodoggie →
This entry was posted in Animal Advocacy, The Woof on Animal Welfare Legislation and tagged animal abuse, animal advocacy, animal cruelty, animal welfare legislation, C.A. Wulff, Definition of puppy mill, dogs, HSUS, Ohio SB331, puppy mills, Rolling Stone, Up On The Woof. Bookmark the permalink.

1 Response to Just What the Hell is a Puppy Mill, Anyway?