Why the Tragedy at Franklin County Dog Shelter Has Set My Hair on Fire.

My hair is on fire.

There’s no other way to describe how I feel after hearing about the mass kill at Ohio’s Franklin County Dog Shelter this past weekend. Before I launch into a discussion about why it should not have happened, and how it could have been avoided, I want to tell you why (aside from the obvious reason) it has upset me so much.

The role of an animal control facility is to round up stray animals and hold them for a period of time so they can either be claimed by their owners or put up for adoption. First, I dislike the word “owners”, because pets are family members – or should be – they are not slaves, and they are not objects.

There are no statistics as to how many “strays” who enter shelters have homes and families. There’s actually no way of knowing that…because not every family knows what to do when they lose a pet and how important it is to check their local animal control in person. The ASPCA reports  that out of the number of stray dogs who enter shelters each year, 35% are adopted to new families; 31% are killed; 26% are returned to their homes. It is certain that out of the 66% adopted or killed, a portion of those dogs are misplaced pets who had a home before they were picked up by animal control.

During the weekend of Sept 10-11, Franklin County Dog Shelter performed a mass kill, taking the lives of 52 dogs. (UPDATE 9/15: the number is now 70.)  I think it is safe to say, and prudent to remind everyone,  that a percentage of those dogs were people’s lost pets…and that is the part that upsets me the most…there are always a ton of missing Franklin County dogs posted on my page Lost & Found Ohio Pets.  I lost two of my own dogs many years ago. Although I got them both back, the thought of one of my dogs being picked up as a stray and then killed before I had the chance to reclaim him, is the stuff that nightmares are made of.

FCDS’s justification for this abomination is that a dog came into the shelter who had distemper. When it was all said and done, they told the media they’d had an “outbreak”.   FCDS has come under a lot of fire lately for how they operate. There have been reports about how what they do and what they tell the public are often at odds. I don’t work there or volunteer there, but I’ve been hearing from people in the know about the shelter for quite some time. The media reported:

“The one case of distemper that was confirmed by a lab test was found to be positive on Sept. 3. That dog, which suffered neurological damage and was euthanized on Aug. 31, was at the shelter from Aug. 9 to Aug. 19.

Then, over the past week, two other shelter dogs showed signs of distemper, which prompted the shelter to close on Friday. Officials are awaiting test results on those two dogs. The shelter remained closed over the weekend.

The other dogs that were euthanized over the weekend weren’t tested for distemper. It was impractical to test every dog at the shelter before euthanizing or quarantining it because tests are costly and can sometimes produce “false positive” results, O’Quin said. It costs at least $100 to test one dog for distemper, she said.”

Cases of distemper in shelters are not a new thing, and there should be procedures in place in every shelter to make sure this doesn’t happen. I’ve highlighted some of the info in the above statement because there is a lot wrong there. Dogs with distemper show signs of sickness before it gets to the point of causing neurological damage. The sick dog was at the shelter for…well, how long? O’Quin says 10 days. I assume the dog was adopted on the 19th and returned on the 31st..the following timeline provided by Tom Sussi of Fox28 in Columbus details all that. 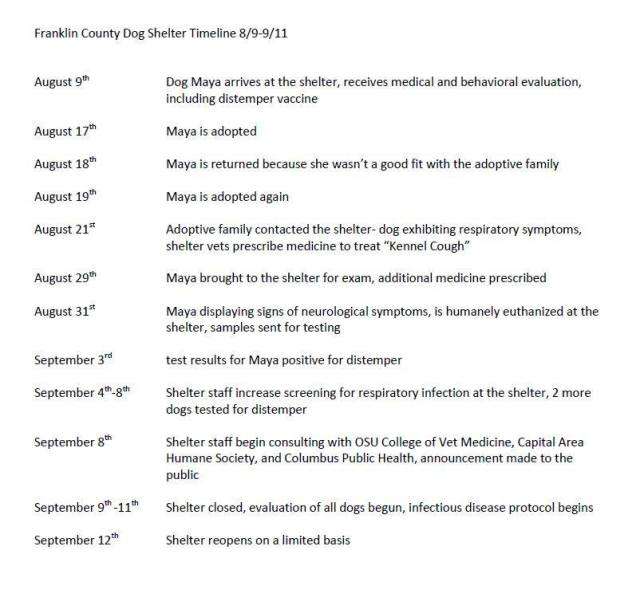 So if dogs at the shelter were exposed between Aug 9-19, well….a mass kill is like closing the barn door after the horse is gone, isn’t it? There should have been an immediate announcement from FCDS that dogs adopted from the shelter between Aug 9-31 may have been exposed to distemper, so their families could be on the alert for signs.

The public held a protest at the facility on Tuesday, Sept 13. The protest centered around the fact that FCDS, knowing they had a case of distemper, still did not notify the public for 5 more days. During that time, they held an adoption event and hundreds, if not thousands of people came and went from the facility. Distemper is extremely contagious. A person can transfer the disease via their clothing/shoes to any dogs they come in contact with. According to Sussi:

“Between August 9 and September 9, 434 dogs were adopted out. Another 146 went to rescue groups. That means it’s possible 580 dogs have been exposed to distemper and were released into our community.”

As to the statement that 49 of the dogs killed were not tested because it was “impractical”…well, the rescue community is not called a “community” for nothing. All the facility needed to do was reach out. The community would have found the money to test, because that would have been 2,000 times preferable to killing.

Nine of the dogs killed by FCDS last weekend. Grace and her eight puppies.

Elsewhere in the statement, Wilbers said “The 52 dogs that were euthanized had either shown “severe clinical signs” of distemper or were determined to not be suitable for quarantine.” But I’m not buying that. If that were the case, it would be unconscionable for the shelter to hold an adoption event, knowing that they had a bunch of sick dogs…wouldn’t it? Two other dogs showed signs (and it’s since been verified that they were positive for distemper). The others: those dogs‘not suitable’ for quarantine (whatever that means) could have been tested.

And let’s not forget…it’s standard procedure for a vet to vaccinate a dog against distemper…meaning that those dogs who were killed who happened to be lost pets…the chances that they were vaccinated is pretty damn high.

So, what should facilities do to avoid this sort of thing happening? According to the SPCA, “There are about 13,600 community animal shelters nationwide that are independent; there is no national organization monitoring these shelters.” Well, maybe there should be. Maybe there should be standardized procedures and monitoring of shelters in the interest of the public health and animal welfare. I know that wouldn’t be easy, but nothing worthwhile ever is.

I would like to see a commission formed of veterinarians and animal behaviorists to draw up a list of federal guidelines for the set-up and operation of animal shelters, including budget recommendations depending on shelter size. They should recommend stop gaps to keep tragedies like this one from happening again. I’d also like to see departments developed in each state to inspect and oversee their shelters.

There are five dogs here Up on the Woof, and we are always looking for coupons for certain items we purchase for the dogs on a regular basis. If you have Rachael Ray Nutrish coupons,  Cesar coupons, or milkbone coupons that  you will not be using, please save them for us. Contact me if you have some to send.

And if you come across an errant box of Purina Busy HeartyHides in your store, for God’s sake, send them to us!

I also have a wishlist of items that we just can’t afford, but that would make life a whole lot easier.

Ariel C. Wulff is an author, artist and animal advocate. They have been involved in pet rescue for over twenty-five years. They have written two books about their true-life adventures living with an ever-changing house full of pets: Born Without a Tail, and Circling the Waggins, and a guide to animal advocacy using the Internet as a tool: How to Change the World in 30 Seconds". Wulff also wrote a pet column and book review column for the Examiner, and was a contributing editor for AnimalsVote.org. They attribute their love of animals to having been raised by Wulffs.
View all posts by yelodoggie →
This entry was posted in Animal Advocacy, The Woof on Animal Welfare Legislation and tagged animal adoption, animal advocacy, animal rescue, animal welfare, animal welfare legislation, animal-rights, C. Ariel Wulff, C.A. Wulff, Columbus distemper outbreak, dog laws, dogs, Franklin County Dog Shelter, Lost pets, Shelter dogs, Up On The Woof. Bookmark the permalink.

5 Responses to Why the Tragedy at Franklin County Dog Shelter Has Set My Hair on Fire.