Animal Activism: Weighing in about the Way in.

I grew up in an apartment building. It wasn’t an environment exactly conducive for being exposed to animals, but my Dad wasn’t your typical apartment dweller. He was a country boy, and he was a total nut for animals. Because my parents were managers of the apartment building we lived in, during the course of my childhood, in addition to a cat and a dog, we had chickens, rabbits, a raccoon, a tiny alligator, fish, canaries, a dove, and a skunk.

Squeezing a guinea pig at the Cleveland Zoo. (1967)

Our menagerie of pets wasn’t my only exposure to animals at a young age. My dad took me horseback riding from the time I was five. My mom loved the Cleveland Zoo, and we always made one or two trips a year. That was in the 1960’s, before zoos had such nice habitats for the animals. Back then, the large animals were kept in stark cages with bars and had very little mental or environmental stimulation. We visited Sea World, and the Jungle Larry attraction at Cedar Point Amusement Park at least once a year. We visited Deer Park in Pymatuning, PA and stopped at several roadside attractions on trips. At one of these, I rode an elephant. At another, I held a baby lion. I’ve been to the circus at least a half dozen times.

As an adult, I became an animal advocate, writing about animal welfare and working to improve the lives of all types of animals. My particular passion is dogs, but I do write letters to legislators about farm animal welfare and the welfare of animals in various entertainment venues. I can’t help but think that my exposure to animals throughout the course of my childhood laid the groundwork for that advocacy. 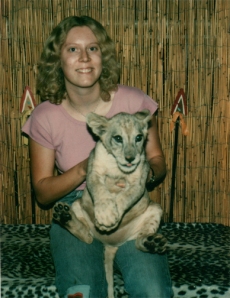 Holding a baby Black Maned lion at a roadside attraction. (1978)

It wasn’t that seeing the animals in these places made me want to advocate for their welfare…it was that the early exposure to them nurtured my interest – an interest that grew into activism.

There is quite a spectrum in animal advocacy, and I know people who fight for all sorts of causes. They fight for shelter animals, circus animals, farm animals, laboratory animals and wild animals. They advocate for senior pets, special needs pets, and certain dog breeds. There is so much work to do.

Although I concentrate my advocacy on causes involving dogs, like other activists, I am dismayed to see the way animals are treated in the circus and in laboratories, and I feel it is wrong to keep dolphins and whales confined to small enclosures for their entire lives. If it weren’t for the conservationist angle of zoos, I might be against them, too. But a part of me remembers the experiences from my childhood, and I wonder if I’d be an advocate today if it hadn’t been for that exposure. It makes me wonder; if every avenue of advocacy is eventually successful, where will children gain this face-to-face exposure and how will they ever come to be passionate about animals and animal welfare?

Last month I watched an episode of National Geographic’s Inside: Secret America that was about animal activists who work undercover. The episode discussed the recent trend of ag-gag legislation across the country, and its effect on animal cruelty investigations.  Ag-gag legislation seeks to make undercover animal abuse investigations illegal. The Agricultural lobby has pushed the legislation through in about a dozen states so far, with more to come. They make the laws sound like they are protecting animals, by making provisions in them requiring that any animal abuse be reported immediately. But it’s an underhanded way to make sure that enough evidence can’t be gathered to bring charges against animal facilities for ongoing cruelty.

An activist was interviewed in the NatGeo documentary who has worked for years behind the scenes to uncover abuses in puppy mills and factory farms. During one part of the interview, he was discussing an Ohio puppy mill where he had worked. He had footage of the puppy mill owner asking if any of the employees wanted a cocker spaniel that he was going to kill. No one spoke up, and the puppy mill owner shot the dog to death right in front of the workers, while the activist recorded it all on a hidden camera. 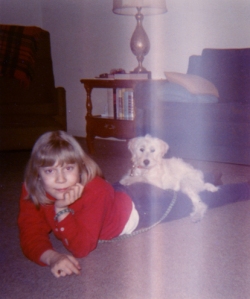 The activist said he could have saved the dog’s life by speaking up, but he stayed quiet, because it was more important that he gather the undercover video of what was going on at that facility. He said he had to make an instantaneous decision as to whether the life of that one dog was more important than getting the evidence he needed to bring charges against the mill owner and ultimately save many more dogs. He decided that the needs of the many outweighed the needs of that single dog.

It is an ethical dilemma. The Nat Geo program struck a chord, because I’d been thinking about my experiences at zoos, circuses, and other entertainment venues, and the effect they’d had on me, and I’d been contemplating the question of whether or not the animals who spend their lives in captivity are like that cocker spaniel in the puppy mill: sacrificing their lives to ensure there will be a next generation of advocates. I think this is a discussion we should be having: Where should the fight be concentrated? To free these animals from captivity, or simply to ensure they are humanely treated? Do the needs of the many outweigh the needs of the few?

What do you think? Please take the poll, then share your thoughts in the comments below.

Are you an animal advocate?  “How to Change the World in 30 Seconds” was written for beginners and novices alike. It is a comprehensive guide to using the Internet as a tool to advocate for shelter animals.

Ariel C. Wulff is an author, artist and animal advocate. They have been involved in pet rescue for over twenty-five years. They have written two books about their true-life adventures living with an ever-changing house full of pets: Born Without a Tail, and Circling the Waggins, and a guide to animal advocacy using the Internet as a tool: How to Change the World in 30 Seconds". Wulff also wrote a pet column and book review column for the Examiner, and was a contributing editor for AnimalsVote.org. They attribute their love of animals to having been raised by Wulffs.
View all posts by yelodoggie →
This entry was posted in Animal Advocacy, The Woof on Animal Welfare Legislation and tagged activism, animal advocacy, animal cruelty, animal welfare, animal welfare legislation, animal-rights, C. Ariel Wulff, C.A. Wulff, Cayr Ariel Wulff, circus animals, humane-education, Up On The Woof, zoos. Bookmark the permalink.