Posted on December 7, 2012 by yelodoggie

[History: This article first appeared on the Pet Pardons News website April 4, 2012. It is the fifth installment in an ongoing report – click here for the earlier articles: part 1, part 2,  part 3, part 4 ] 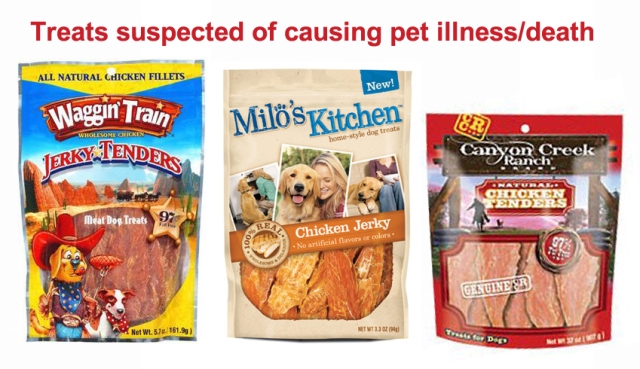 Facebook users were burning up bandwith last night over a rumor in two Facebook groups concerned with dog treats that are imported from China. When a group member with alleged inside information from the FDA announced that the Food and Drug Administration was inspecting Chinese manufacturing plants and were close to solving the riddle of why dogs are being poisoned by chicken jerky treats, group members posted fast and furiously.

Many of the group members have had pets die from eating the treats, many are still nursing sick pets that may or may not recover. All of them are clinging to hope that they will one day have an answer to the question they are all asking:

Why are the treats making pets ill? Why can’t the FDA find the source of the toxin? Why hasn’t there been a precautionary recall? Why are these potentially deadly treats still on store shelves when the FDA has received more than 600 complaints of illness or death?

Senator Sherrod Brown and Representative Dennis Kucinich of Ohio have been asking those same questions, too. They’ve been after the FDA since February to get to the bottom of the problem and to insist on a product recall.

Today, the FDA denied that they are any closer to announcing a discovery.

However, according to MSNBC,   a spokesman for Representative Kucinich said “Based on our ongoing discussions with the FDA, we are expecting important new information soon,” directly contradicting the official word from FDA to Pet Pardons Media.

Senator Brown’s office did verify today that Federal health officials have sent inspectors into the Chinese plants making the chicken jerky treats to see if they can find the source of the contamination.

Last month, msnbc.com reported that FDA records showed that a log of owner and veterinarian complaints named at least three popular brands of jerky treats: Waggin’ Train, Canyon Creek Ranch and Milo’s Kitchen Home-style Dog Treats. Waggin Train and Canyon Creek are products of Nestle Purina. The dog food manufacturer has repeatedly insisted that their treats are safe when fed correctly, even when confronted with hard evidence to the contrary.

Pet owners are angry that Nestle Purina has attempted to shrug off the reported illnesses and deaths by citing their feeding recommendations on the back of the packages. The pet food manufacturer has repeatedly suggested that pet owners are feeding the treats in excess, and instead of a proper nutritious diet. Nothing could be further from the truth.  Several pet owners reported their dogs becoming deathly ill after eating only part of a single treat.

The website Panjiva  indicates that JOC Great Wall Corp Ltd. Of Nanjing, China is the manufacturer and exporter of the treats. It is unknown whether the FDA is inspecting the plants operated by the exporter.

FDA scientists have been testing CJTs since 2007, looking for evidence of toxins, heavy metals, melamine, poisonous glycols and chemicals used in plastics and resins. They keep coming up empty.

One scientist at the Cummings School of Veterinary Medicine at Tufts University said that whatever the contaminant is, it’s something they’ve never seen before.

C.A.Wulff is an author, artist and animal advocate. They have been involved in pet rescue for over twenty-five years. They have written two books about their true-life adventures living with an ever-changing house full of pets: Born Without a Tail, and Circling the Waggins, and a guide to animal advocacy using the Internet as a tool: How to Change the World in 30 Seconds". Wulff also wrote a pet column and book review column for the Examiner, and was a contributing editor for AnimalsVote.org. They attribute their love of animals to having been raised by Wulffs.
View all posts by yelodoggie →
This entry was posted in Animal Advocacy, SPECIAL WOOF REPORTS and tagged Canyon Creed Ranch, Chicken Jerky treats from China, Dog Treat Recall, FDA, FDA investigations, Milo's Kitchen chicken jerky, pet food recall, poisoned pets, Representative Dennis Kucinich, Senator Sherrod Brown, Waggin Train chicken jerky. Bookmark the permalink.

5 Responses to APRIL 2012: FDA Denies Reports That Chicken Jerky Toxin has been Pin-pointed