Pardon Me, But This is Really Important.

In December of 2010, a woman named Ashley Owen Hill from Meridian Mississippi, and a guy named Chris Hoar from San Diego California, created an app for Facebook called Pet Pardons. Ashley and Chris are animal rescuers and advocates, and Pet Pardons is quite simply; genius.

Essentially, it’s an application where other rescuers can list dogs and cats that are on death row across the nation. The idea is that when a person uses the Pet Pardons app,

Boris. He is in Columbiana County Animal Shelter.He's been there half his life.

with just a click they can share an animal on their Facebook wall, and bring it to the attention of potential rescuers and adopters. When you use the app, it first shows you the animals that are in your area. Under that is a section called “Pets that die within the next 48 hours”, which lists dogs and cats in kill shelters all across the country that are in imminent danger.

The Pet Pardons Facebook application has been responsible for the successful adoption of over 5,000 pets since its launch in December of 2010 and has amassed over 170,000 followers on Facebook who are ready to help advocate for an animal in need at a moment’s notice. 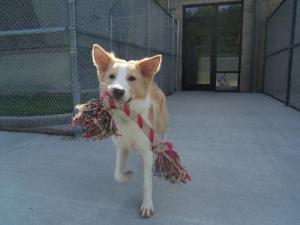 Yoko. He is at the terrible Summit County Animal Control facility

Talk about swimming in quicksand. How can I even describe the agony in my heart seeing that sea of faces? How can I begin to explain my approach/avoidance conflict when using the app?

I have to be careful about using Pet Pardons. I want to click on every animal in danger. I agonize over clicking one over another. You see, I don’t feel like it’s helpful to share animal-after-animal, day-after-day. How soon before many of my Facebook friends get tired of seeing all those dog faces every time they log on? How soon before they just hide my updates so they don’t have to deal with it?

See, not everyone can handle seeing all those animals every day, especially knowing that the animal might be killed tomorrow or the next day. It’s overwhelming. It’s depressing. It makes people feel helpless. And if people hide my updates, not even one animal will be helped. I don’t want that to happen; so I’m careful.

A lot of dogs get saved. The app lets you enter your email address, and if one of the pets you advocate is “pardoned” (meaning that a rescue or adoption has come through), you get an email telling you.

I can’t begin to describe how great that feels.

For the really brave, you can click on the “My Advocated Pets” section, where you will see who is still alive, who has been pardoned, and sadly, who has been euthanized.  You can readvocate for any still alive.

Lyle. He was at the Stark County Dog Pound. He died last Tuesday.

I love it because two people have made it a no-brainer to help animals. All it takes is a click. Anybody can do it. Ultimately, the greatest thing would be if every one of my Facebook friends shared at least one pet a day on Pet Pardons.

I got two emails today that two of the pets I advocated have been saved. I helped do that, and that feels great.

Ariel C. Wulff is an author, artist and animal advocate. They have been involved in pet rescue for over twenty-five years. They have written two books about their true-life adventures living with an ever-changing house full of pets: Born Without a Tail, and Circling the Waggins, and a guide to animal advocacy using the Internet as a tool: How to Change the World in 30 Seconds". Wulff also wrote a pet column and book review column for the Examiner, and was a contributing editor for AnimalsVote.org. They attribute their love of animals to having been raised by Wulffs.
View all posts by yelodoggie →
This entry was posted in The Woof on Animal Resources, The Woof on Rescue Groups and tagged activism, animal rescue, cats, dogs, facebook apps, pet pardons. Bookmark the permalink.

12 Responses to Pardon Me, But This is Really Important.