Believing in a Cause & Walking the Walk

A lot of people who believe in a cause “talk the talk”, but not very many people “walk the walk”. Recently, I’ve followed the story of a woman in dog rescue who is on a mission, and who is one of those extraordinary people who has the resolve and conviction and guts to truly walk the walk.

I’d never heard of Tamira Thayne until I got a facebook account and she ended up in my friends list via a mutual friend in animal rescue. Tami is the founder of a 501(c)3 non-profit group called Dogs Deserve Better, which I’ve already profiled here on Up On The Woof. (archives, August 2010. “Rescue Group: Dogs Deserve Better”.) It’s a group devoted to getting dogs off of chains where they live lonely and miserable lives and into houses where they get the love, attention and care that they deserve.  DDB advocates for these dogs that are often ignored and forgotten; sometimes dying of starvation and sickness on the end of a chain. They work tirelessly to promote anti-tethering laws across the country.

Tamira lives in Pennsylvania, where she’s waited six years for anti-tethering legislation to be passed. First it was HB1911, HB1065, HB1254, the Casorio/Caltigirone bill, and most recently SB1435. Tami believes so strongly that there should be a law limiting the amount of time that a dog should spend on a chain each day, that on August 2, 2010, she chained herself to a doghouse on the steps of the Pennsylvania Capitol building in Harrisburg, and she stayed there for 52 days. She took this bold and extreme step to show the legislators who have been sitting on these bills for six years, what it is like for a dog that is chained to a doghouse day in and day out, in all kinds of weather, year after year after year. She stood on the steps of the Capitol building every day to remind the politicians that the bill was still unsigned.  This was the hottest summer on record, but Tami stood out there every day, no matter how hot it was, to demonstrate the way tethered dogs bake in the hot sun of summer with inadequate shade or water.  She fasted to remind people how many chained dogs starve because their owners forget to feed them. She stood in the pouring rain to remind the lawmakers that seldom does a tethered dog have adequate shelter from inclement weather. And she talked to passersby, and did her best to spread her message and educate people. 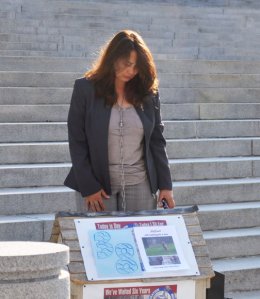 Tamira Thayne, chained to a doghouse outside the PA State Capitol Building in Harrisburg.

On October 12, the Pennsylvania house and senate closed for recess until January 2011. The anti-tethering legislation was still not signed into law.

During the 52 days that Tamira spent chained on the Capitol steps, three children in Pennsylvania made the papers from chained dog attacks. Dog attacks are not uncommon from chained dogs, who are unsocialized and neglected. Every state should move to do something to protect the dogs and the children from the dangerous impacts of 24-7, 365 days a year tethering. Speak out!

For more information about Tamira or Dogs Deserve Better, visit http://www.dogsdeservebetter.org/.  There are steps outlined there for how you can introduce an anti-tethering bill in your own state.

C.A.Wulff is an author, artist and animal advocate. She has been involved in pet rescue for over twenty-five years. She has written two books about her true-life adventures living with an ever-changing house full of pets: Born Without a Tail, and Circling the Waggins, and a guide to animal advocacy using the Internet as a tool: How to Change the World in 30 Seconds". Wulff also wrote a pet column and book review column for the Examiner, and was a contributing editor for AnimalsVote.org. She attributes her love of animals to having been raised by Wulffs.
View all posts by yelodoggie →
This entry was posted in The Woof on Animal Welfare Legislation and tagged animal welfare legislation, animal-rights, anti-tethering, Dogs Deserve Better, humane causes. Bookmark the permalink.

4 Responses to Believing in a Cause & Walking the Walk